A Return to the Bronson Caves

Sunday, February 24th, 2013
2pm
At the Batcaves of Griffith Park 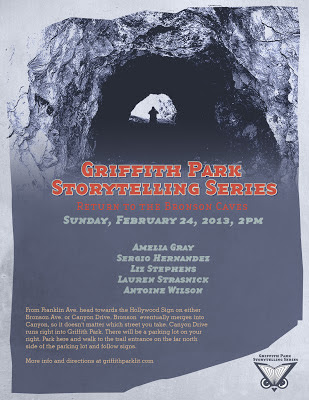 Join us for an afternoon of readings with
Amelia Gray, Sergio Hernandez, Liz Stephens, Lauren Strasnick and Antoine Wilson

Amelia Gray is the author of AM/PM (Featherproof Books) and Museum of
the Weird (FC2), for which she won the 2008 Ronald Sukenick Innovative
Fiction Prize. Her first novel, THREATS, was published by Farrar, Straus
and Giroux. Her writing has appeared in Tin House, Poets & Writers,
American Short Fiction, McSweeney's, and DIAGRAM, among others. Find
more at ameliagray.com or on Twitter @grayamelia.


Liz Stephens served as Managing Editor of Brevity Magazine, and recently finished a PhD in nonfiction. She's been published in Fourth Genre and some other nice places, and won or been nominated for a couple of cool awards, and has a book that's being released this week from Nebraska Press, named "The Days Are Gods." You are all invited to its release party.

Lauren Strasnick is a graduate of the CalArts MFA Writing Program. Her debut novel, NOTHING LIKE YOU (Simon Pulse/S&S, 2009), was an RWA RITA award finalist in two categories, Best First Book and YA Romance. Her second novel, HER AND ME AND YOU (Simon Pulse/S&S, 2010), was a 2012 ALA Quick Pick for Reluctant Young Adult Readers. THEN YOU WERE GONE (Simon Pulse/S&S), Lauren’s third book, hits shelves this January.

Antoine Wilson is the author of the novels The Interloper (Other Press,
2007) and the recently released Panorama City (Houghton Mifflin
Harcourt, 2012). He has taught creative writing at Iowa, Wisconsin, CSU
Long Beach, UC San Diego, and UCLA Extension

Posted by Sara Finnerty at 1:34 AM