A Reading in Fern Dell 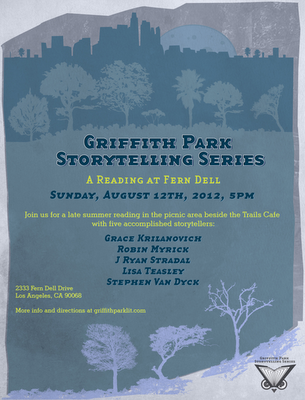 Five writers will perform stories, poems and essays in the outdoor, shaded seating area beside the Trails Cafe in Griffith Park


Directions: Turn into the park via Fern Dell Drive from Western or Los Feliz Blvd. Drive straight on Fern Dell until you see the Trails Cafe on your left. Park anywhere along the road and head to the Trails Cafe. You will see white lights and picnic tables. Come a few minutes early if you would like to walk around Fern Dell or purchase some homemade sweet or savory foods from the Cafe. 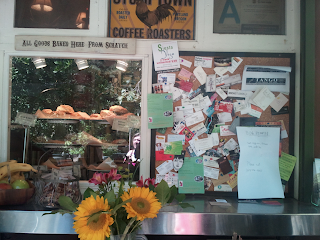 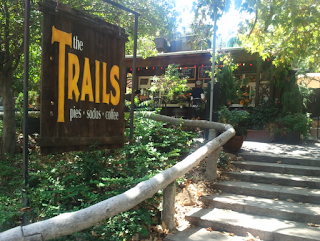 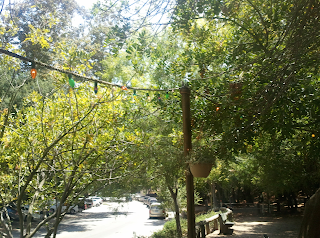 Grace Krilanovich's debut novel The Orange Eats Creeps, published by Two Dollar Radio, was a finalist for the Indie Booksellers' Choice Award and the Believer Book Award, and was named one of Amazon's Top  Ten Science Fiction/Fantasy Books of 2010. Grace is a MacDowell Colony fellow and was a National Book Foundation "5 Under 35" honoree for 2010.

Robin Myrick is a Texas-based writer, visual artist, and color commentator on American culture. She's currently an instructor and doctoral student at the University of Texas at Dallas, and she holds an MFA in Writing and Critical Studies from California Institute of the Arts. Her work has been featured in Chronometry, [out of nothing], and the anthology You've Probably Read This Before, among other respectable-type publications. She also makes and shows things with the art collective In Cooperation With Muscle Nation.

J Ryan Stradal is from what claims to be the second-oldest town in Minnesota. His writing has appeared in Hobart, The Ratting Wall, Midwestern Gothic, The Rumpus, McSweeney's Internet Tendency, The McSweeney's comic strip series "The Goods," The Nervous Breakdown, and The Foghorn, among others. He also volunteers for 826LA, helps make products and materials for the Echo Park Time Travel Mart, and sometimes produces Emmy-nominated TV shows. He likes books, wine and peas.

Lisa Teasley is the author of the critically acclaimed novels HEAT SIGNATURE and DIVE, and the award-winning story collection, GLOW IN THE DARK. A frequent contributor to Black Clock, Teasley is also writer and presenter of the BBC Television documentary “High School Prom” and a columnist for the Los Angeles Review of Books.

Stephen van Dyck uses performance, video, text and sound to dissect social rules and spaces. An MFA graduate of Integrated Media, Critical Studies and Experimental Sound Practices at CalArts, he has performed and presented work all around Los Angeles, including LACMA, MOCA, Machine Project, LACE, Wildness, Public Fiction, Workspace and Sea and Space.  Since 2008, he has curated the annual Los Angeles Road Concerts, all-day arts events of over 200 LA artists and locals re-imagining unused public space along the entire lengths of LA's very long streets with site-specific installations, performances, discussions and car pool happenings. He's currently amidst completion of his first book, "People I've Met from the Internet," a conceptual writing project, coming out/coming of age story and field study in the form of a very long annotated list. He forever resides in LA and for money he pretends to be fifty identities on an online forum to make a website seem popular.
Posted by Sara Finnerty at 11:55 PM No comments: